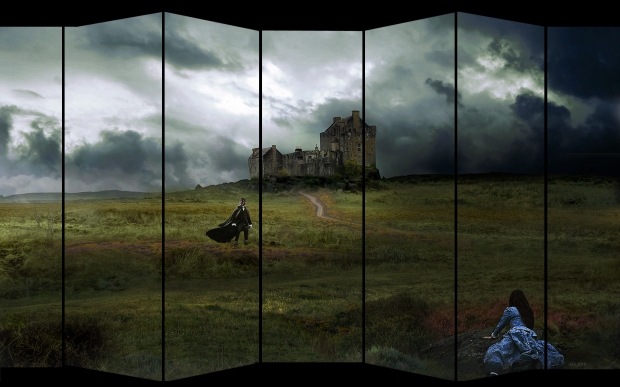 I read Emily Bronte’s one and only novel Wuthering Heights back in high school, and it’s a book that stuck with me all these years.

Why? I’m not into romance, or English period dramas, so those weren’t the draws. Instead, it was the strangeness of it all. There was something weird about the book, something supremely off-kilter that I never could identify.

For those who don’t know, Wuthering Heights is a gothic romance about the tortured relationship between the darkly brooding Heathcliff and the spoiled Catherine Earnshaw. Their love (if you can call it that) is charted through fights and marriages to others, and ultimately death — first hers, then his.

The book, while heavy on the melodrama, carries an undercurrent of horror. Dreams are filled with the pleading ghost of Cathy. And the dreams are downright creepy.

I read an article today on Chuck Palahniuk’s website LitReactor that, if correct, makes sense of the weirdness that is Wuthering Heights. According to the writer, Wuthering Heights is secretly…

The article’s writer expertly makes her case, including details regarding the deaths of both Cathy and Heathcliff, details that sound reminiscent of vampire lore.

Another fact she brings up: vampire mythology was well-known and popular in mid 19th century England.

If her theory is correct (and it makes sense to me), then Emily Bronte pulled off a brilliant trick — crafting a vampire novel without ever naming the creatures, or dwelling on their vampirism.

Read the article and judge for yourself.

A few weeks ago, I started watching the Netflix supernatural series Hemlock Grove on a whim. Somehow I managed to get through all 13 episodes of the first season. Still, I’m not sure if the show is a brilliant mess or a well-meaning failure.

Hemlock Grove, based on a book by Peter McGreevy (who also created the show), is a riff on the vampire and werewolf takes we all know by heart. It’s set in a fictional Pennsylvania town that is typically mid-America in all ways (with a touch of Twin Peaks), except for the monsters that roam its streets and woods.

The action begins, harshly, as a girl is brutally attacked and disembowled on her way to rendezvous with her high-school teacher. From there we meet the locals. There’s the powerful Godfrey family, headed by matriarch Olivia (played by X-Men’s Famke Janssen), and her teenage children: brooding, spoiled Roman (Bill Skarsgard), and the awkwardly disfigured Shelley. And we also meet the Rumanceks: Lynda (Lili Taylor) and her teenage son Peter (Landon Liboiron). And then there’s Norman Godfrey (Dougray Scott), his teenage daughter Leetha and his wife (no name; she doesn’t matter). Norman is Olivia’s brother in law, and Roman and Shelley’s uncle.

So that’s the basic setup of Hemlock Grove. Simple enough, except that none of it really makes sense. Everything about the show — from the acting to the writing to the basic plotting — seems off. I could write several blog posts about the strangeness of this show, but here are just a few examples.

–The locals quickly tag Peter as a werewolf because of his “excessive body hair.” The actor who plays Peter, however, has not that much body hair at all. But he really is a werewolf after all (!)

–The wildly over-the-top Olivia Godfrey is supposed to be English, but her accent slips and slides all over the place. And Roman’s accent as well is bizarre (it turns out the actor is Swedish)

–Dougray Scott must be pissed off at having to play on this show. He mopes through every scene, as if all he’s thinking of is cashing the next paycheck. At least Famke Janssen gets the joke; she camps it up in every scene she’s in

–There’s some seriously strong gay subtext in the friendship between Peter and Roman. It is not at all subtle, though it doesn’t do much in terms of developing their characters. It’s basically pointless

–The high schoolers are written way more adult. Roman, for example, zips around in his classic sportscar as he hires hookers, chain smokes, and drinks in bars. And school seems optional

It took me a while to figure out what the hell was up with Hemlock Grove. It’s weird and surreal. It’s badly written and unevenly acted. But I couldn’t stop watching. Then it clicked. It’s produced by Eli Roth, the man behind Hostel. I remember watching Cabin Fever, directed by Roth, years ago. Cabin Fever was a grade B horror flick, nothing groundbreaking about it. But it was so damned weird. And Hostel likewise was just plain bizarre. Apparently Eli Roth has developed his own freaky genre.

Hemlock Grove did manage to wrap up its main story lines by episode 13 in a mostly satisfying way. And it was definitely entertaining as I felt whiplashed between the weirdness and the awfulness.

So would I recommend watching Hemlock Grove? My advice would be to proceed with caution.

I’m a fan of supporting my local community, and that doesn’t just mean going to the local bars. I’ve become involved in my writing community here in Jersey City, and one of the

writers I’ve met is Madhuri Blaylock, a woman with a penchant for fantastical stories of page-turning urban paranormal fiction.

Her first book, The Sanctum: The Girl, follows our teenage hero Dev, a demon-angel hybrid. She’s targeted for death by a shadowy organization called the Sanctum, a worldwide group of families that monitors all the paranormal activity in our world. Dev, however, proves difficult to kill. Not only that, but she falls for one of he Sanctum’s best killers, Wyatt.

This was a fun book, full of relatable characters that ranged from stalwart best friends to seductive vampires, as well as

mustache-twirling villains I loved to hate.

Now Madhuri has released the second book in the trilogy, aptly titled The Sanctum: The Boy. Check it out, help me support my local community, and have some fun in the process.

This literary/genre juggernaut is worth the hundreds of pages.

If you picked up The Passage without knowing the plot, you would quickly know that dark times were ahead. It starts out with a deadly virus culled from South American bats, adapted and tweaked by government scientists to create super soldiers. Of course they test it out on twelve vicious killers on death row. And of course the outcome is worse than these scientists could ever have imagined.

So begins The Passage, Justin Cronin’s cinder block sized novel about vampires, the first of a trilogy. In other hands this setup might have been just another soon-to-be-forgotten pulp read. Cronin has the skills and literary background to create a lush, sprawling tale that spans genres and centuries.

The Passage, like the monsters it portrays, mutates and grows. It starts off as a technothriller that follows FBI Agent Brad Wolgast and one little girl named Amy. Amy is taken by these scientists and is given the same serum that turns twelve killers in to vampires. It doesn’t do that to her; instead it keeps her young. As the twelve proto-vampires escape and create their own tribes of powerful, evil vampires, Wolgast takes Amy and flees into a dying America.

Courtesy of a report from a University set 1,000 years in the future (there’s hope for humanity!), we jump ahead nearly 100 years after the first vampires were created. Now we’re in a small California compound — a former FEMA camp — with a handful of survivors. Here we follow Alicia, one badass warrior woman, and Peter, along with other members of their community, as they struggle to survive. The technothriller is now a dystopic tale, reminiscent of the Mel Gibson flick The Road Warrior, though one deeply infested with horror that rivals Stephen King. Amy, the infected girl from the beginning, shows up and she becomes pivotal to the colony’s struggle against vampire hordes and horrific odds.

So what’s great about The Passage?

Start with the writing. I’m a fan of wordsmiths, and Cronin is definitely one. Though the book is huge, there isn’t much in terms of fat, and lyrically it is beautiful without being distracting.

Then there are the characters. The Passage includes several characters, and Cronin writes from their point of view. We get to know there people, and without exception they’re all three-dimensional.

And the plot. The Passage is thrilling end-of-the-world fare. We see America crumble. There’s a scene early on as a train full of people flees Philadelphia – the last train out before the city is overwhelmed. The train ride is harrowing, as the vampires pick off the train car-by-car. A few lucky ones only barely manage to survive. This scene has stayed with me.

This is just a glimpse into the world of The Passage. There are tons of twists and turns in this book, more than enough to get you hooked.