I read Emily Bronte’s one and only novel Wuthering Heights back in high school, and it’s a book that stuck with me all these years.

Why? I’m not into romance, or English period dramas, so those weren’t the draws. Instead, it was the strangeness of it all. There was something weird about the book, something supremely off-kilter that I never could identify.

For those who don’t know, Wuthering Heights is a gothic romance about the tortured relationship between the darkly brooding Heathcliff and the spoiled Catherine Earnshaw. Their love (if you can call it that) is charted through fights and marriages to others, and ultimately death — first hers, then his.

The book, while heavy on the melodrama, carries an undercurrent of horror. Dreams are filled with the pleading ghost of Cathy. And the dreams are downright creepy.

I read an article today on Chuck Palahniuk’s website LitReactor that, if correct, makes sense of the weirdness that is Wuthering Heights. According to the writer, Wuthering Heights is secretly…

The article’s writer expertly makes her case, including details regarding the deaths of both Cathy and Heathcliff, details that sound reminiscent of vampire lore.

Another fact she brings up: vampire mythology was well-known and popular in mid 19th century England.

If her theory is correct (and it makes sense to me), then Emily Bronte pulled off a brilliant trick — crafting a vampire novel without ever naming the creatures, or dwelling on their vampirism.

Read the article and judge for yourself.

One artist is translating writers’ descriptions of their fictional characters. The results are jarring.

For me, half the fun in reading a book is imagining it in my mind’s eye. Sometimes I get a clear image of the characters; other times the image is hazy as the action takes control. Either way, I’m engaged in creating this world in my own imagination with the blueprint that the writer provided.

Brian Joseph Davis has taken some of the best known — beloved and infamous — literary characters and created sketches of them using law-enforcement composite sketch software. He’s compiled the sketches, and the original descriptions, on his website The Composites.

As described by Gaiman:

“Shadow looked at the man in the seat next to him…He grinned a huge grin with no warmth in it at all…His hair was a reddish gray; his beard, little more than stubble, was grayish red. A craggy, square face with pale gray eyes…The man’s craggy smile did not change…There was something strange about his eyes, Shadow thought. One of them was a darker gray than the other…humorless grin…Wednesday’s glass eye… He was almost Shadow’s height, and Shadow was a big man.”

And as visualized by Davis?

That’s not how I pictured Mr. Wednesday in my head. To me he was older, craggier, beefier.

“My power animal is Marla…Black hair and pillowy French lips. Faker. Italian dark leather sofa lips…Marla stares up at me. Her eyes are brown. Her earlobes pucker around earring holes, no earrings…She actually felt alive. Her skin was clearing up…Marla never has any fat of her own, and her mom figures that familial collagen would be better than Marla ever having to use the cheap cow kind…Short matte black hair, big eyes the way they are in Japanese animation, skim milk thin, buttermilk sallow in her dress with a wallpaper pattern of dark roses…Her black hair whipping my face…The color of Marla’s brown eyes is like an animal that’s been heated in a furnace and dropped into cold water. They call that vulcanized or galvanized or tempered.” 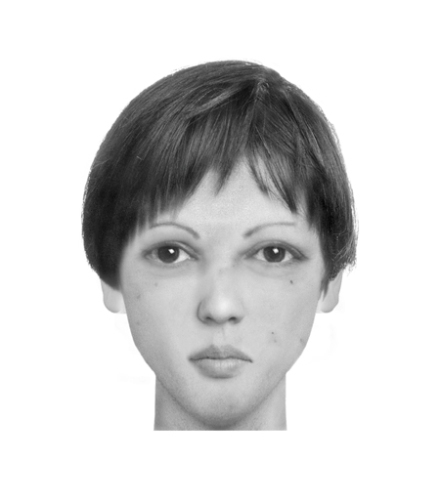 My favorite of Davis’ images is the one that captures a different view of a classic character. In Frankenstein, Mary Shelley describes the monster as:

“Beautiful! Great God! His yellow skin scarcely covered the work of muscles and arteries beneath; his hair was of a lustrous black, and flowing… but these luxuriances only formed a more horrid contrast with his watery eyes, that seemed almost of the same colour as the dun-white sockets in which they were set, his shrivelled complexion and straight black lips.”

And here he is:

With all the Hollywood depictions of the Monster as monstrous, it’s easy to forget that he was not created to be hideous.

As a reader and a writer, I’m not a fan of over-description. In my book The Last Conquistador, I tried to be sparse but concise in my descriptions of the characters. For instance, the protagonist Randy describes his wayward girlfriend Lise as “solid and shapely, like the kid sister of a truck stop waitress.” I wanted to seed a broad image in the reader’s mind.

In Always Mine, Danny, the young hero, meets the stepfather of Tina, the mysterious girl next door that he has a crush on. How do I describe Bob? Using just a few key images:

“He shook Danny’s hand rough and hard. He was meaty with a walrus mustache, and he glared as if Danny harbored bad intentions for his daughter.”

While I prefer the less is more approach, after browsing through Davis’ website and comparing the writers’ words with the sketches produced, I have a greater appreciation for those writers who are meticulous in crafting their characters. It’s fascinating to see how writers shape the worlds we create in our minds.