After this post I’m expecting hordes of furious Jane Austen fans at my door.

So when I was at the used book sale I spied Jane Austen’s classic Pride and Prejudice. Of course I’m familiar with Austen. She’s one of the biggies. She basically invented the romance genre. And who doesn’t love the movie Clueless (which is loosely based on Austen’s Emma)?

I’d never read anything by Austen, though I know many writers and readers who practically worship her. Romance isn’t my thing, but not wanting to consider myself a literary snob, I handed over the dollar and set to reading.

When I was younger I had it in my head that I had to finish every book I started. As I got older and time became more precious, I tossed that useless rule. With this literary challenge, though, I told myself I’d at least read until page 50. If I still couldn’t take the torture, I’d tap out then.

For Pride and Prejudice I made it to page 38.

I don’t know what it was exactly that made me quit this book.

Was it the ridiculous, over-the-top language?

Was it the horrible stage direction, which always had me confused as to who was saying what?

Was it the fact that the most interesting scenes were being described off-camera?

Was it that the only character I liked was Mr. Darcy, who is considered the villain (as far as romances go)?

Maybe it was all of those.

Call me overly proud. Call me prejudiced. But I couldn’t find the charm in Pride and Prejudice.

Maybe I should give Pride and Prejudice and Zombies a shot instead. Who doesn’t love zombies?

Next up: a book that’s the polar opposite of a romance, and one I actually finished.

A few months after my father was killed, my mother purged a ton of his books, so when I was at her house searching for something to read, it shouldn’t have been a surprise that the bookshelves were as bare as a Venezuelan supermarket. All I found were a few 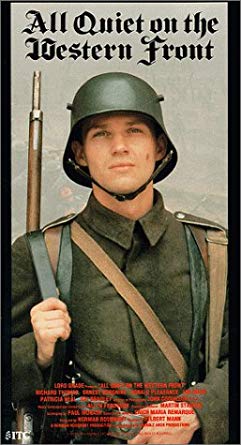 I probably grimaced when I pulled it off the shelf. Not only because it was a boring war novel that you’re assigned in high school, but also because on the cover was John Boy from The Waltons TV show. That show bored me to death, as did the character, so I can’t dissociate the actor from the character, or the show.

Nevertheless, I took it with me. It was short enough to meet my classic challenge standard, and I love the history of Germany during the pre-WWII era. So I figured I’d just try to not look too long at John Boy on the cover and give it a try.

I was expecting Erich Maria Remarque’s classic to be boring. It wasn’t. I was also expecting it to be staid and mannered. I was wrong again. All Quiet on the Western Front is the story of Paul, a battle-hardened German soldier fighting along the western front in France during World War One. In his preface, Remarque clearly states that the book is not meant to be anti war. While it could easily be mistaken for a pacifist plea, it’s not. It’s just a detailed account of life as a soldier.

At times the writing is bawdy. He’s not adverse to throwing in a few fart jokes, of all things. In other episodes, Remarque, through the narrator, clearly relays the intense camaraderie that develops among soldiers. This falls just short of romanticization, which makes it even more effective.

One thing that kept coming back to me (which was in contrast to the thirtysomething actor on the book’s cover) was Paul’s age. He and his friends enlist just after high school. He’s 19 during the course of the book. More than once he comments on how disillusioned he and his entire generation have become because of the war, how lost they are, how much they’ve aged. This was one of the most powerful themes for me.

All Quiet on the Western Front is bursting with rich description. Unlike most modern novels, it’s not told in a traditional three-act structure. That’s because it was serialized during the 1920s. I found the episodic nature of the chapters compelling.

All Quiet on the Western Front didn’t go over too well once the Nazis came into power. It was a target of book burnings, and Remarque fled the country. The Nazis are long gone, but his book still persists.

Next up, my first failure.

As I write this I’m listening to Nine Inch Nails — The Day The World Went Away. It fits the mood I was in when I picked up Edith Wharton’s novel Ethan Frome, and the song’s constrained brutality fits the mood of the book.

I was in a “whole world went away” kind of mood when I rummaged through the stacks of books at the local protestant church’s used book pile (paperbacks for a dollar!). I’d just finished Ursula LeGuin’s The Left Hand o

f Darkness, still haunted by that resonating line of hers: Why can I never set my heart on a possible thing? I was desperate for another book, one that had some words and meaning that would give me something (what “thing” I couldn’t say). On a shelf full of plays I found a few dozen classics. I sifted through them, and I chose Edith Wharton’s book for only one reason. It was short. Right now I can’t sit through anything longer than 300 pages, and this paperback version was about 100.

All I knew of Edith Wharton was that she was a highly regarded American writer from the turn of the last century, that she was rich, and that she wrote books about rich people. I expected Ethan Frome to be a novel about boring rich people and their fussy manners.

It’s about poor people and their fussy manners. And their inability to set their hearts on a possible thing.

Don’t get me wrong. I loved Ethan Frome. It’s a big story in a little book. It’s a focused narrative that mines deep emotions. It is restrained yet revealing.

The book is about the title character’s doomed, aborted love affair. Wharton does something interesting craft-wise. She opens with an unnamed narrator (who totally doesn’t matter) describing an older Ethan as a crippled man, both physically and emotionally. Eventually the narrator learns how Ethan became so wounded. Years earlier, Ethan, trapped in a loveless marriage with the shrewish Zeena, falls for her cousin Mattie, who is boarding with the Fromes to help Zeena, who is more or less a hypochondriac. Ethan falls in love with Mattie. Zeena, who only seems to love her mysterious malady, plans on sending Mattie away. Ethan grows desperate.

And then the trouble begins.

I won’t reveal what happened, but I was totally caught up in the story. Everyone is trapped in lives and a society that offer no escape. Their choices are severely constrained. Hope is hard to come by.

It fit my mood perfectly.

Ethan Frome is a book to wallow in. I don’t thing Edith Wharton thought highly of marriage, and she had no clue about struggling working class folk. but none of that mattered. She burrowed deep into the hearts of her characters. She churned a whirlpool of tension until the final shocking moments when she revealed exactly how Ethan’s body and spirit were broken.

Next in my literary challenge, another dark and stormy classic.