My history with William Faulkner isn’t a positive one. I remember having to read one of his books in high school — I can’t remember whether it was Light in August or The Sound and the Fury. It didn’t go well. Then again, what 16 year old can comprehend stream of

My second attempt came when I was living in upstate New York, a four-hour drive from my family in Jersey, and I’d gotten my hands on a Faulkner audiobook — one of the two aforementioned novels. I can’t recall which one, and again it doesn’t matter, since listening to Faulkner while driving along the New York Thruway is even more pointless than reading it.

Nevertheless, as part of my one dollar, 300 pages or less challenge, I boldly chose Faulkner’s As I Lay Dying (not to be confused with the excellent thrash metal band of the same name, which I am listening to 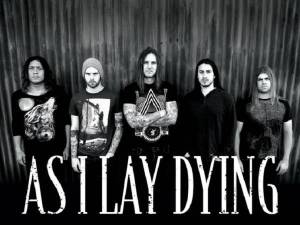 as I write this).

Ok, a bit of a rewind — last year, my friends Sara and Stephen both convinced me to read their favorite book of all time: James Joyce’s Ulysses. So I did, chapter by chapter, and we’d get together over beers to discuss and dissect. It was a challenge, but I finished it. Ulysses is considered the blueprint of modern, stream-of-consciousness writing. Joyce was the pioneer, more or less. Once I slogged through Ulysses, I was at ease with stream of consciousness. Reading Faulkner was now much, much easier.

(Though I did cheat a little; wikipedia helped me sort out the large cast of characters.)

A quick summary of As I Lay Dying: Addie Bundren, the matriarch of the rural southern Bundren clan, is dying, and her last wish is to be buried miles away among her own people. A simple journey tale, right? No. Not so simple. Everything that can go wrong hauling her decaying corpse miles and miles and miles in the southern heat does go wrong. Almost comically.

What makes As I Lay Dying both effective and frustrating is the rotating cast. The book is told in a first person point of view. Not just one, though. Fifteen, including Addie’s toothless husband Anse, her oldest son Cash, another son, the insightful Darl, dutiful daughter Dewey Dell, the secretly illegitimate son Jewel, and the youngest boy Vardaman. Other POVs include neighbors, doctors, etc etc.

You can get whiplash from the constant stream of murmuring voices.

Faulkner does a great job of carrying the reader along, even in places where the reader (me) feels almost lost. That’s because he keeps things interesting throughout.

Given my history with Faulkner, I liked this book way more than I thought I would. One thing that stood out for me was the character of Darl. The story of carrying a decaying body clear across the state is batshit crazy. Darl realizes this. In fact Darl is the only character who can see through all the secrets and lies of the Bundren clan. This eventually becomes his undoing.

Or maybe he’s the one who is batshit crazy.

When you’re the sane one in a crazy world, does that make you crazy in comparison?

The other thing that stood out for me was the title character (well, title POV character). The book is called As I Lay Dying (which is an allusion to the Odyssey, which inspired Joyce to write Ulysses, which clearly inspired As I Lay Dying. Boom!). Addie is the one who is laying dying when the novel opens, so she’s pretty damn important.

But we only get a single chapter from Addie’s POV, which comes in the middle and is out of time with the sequence of events.

That doesn’t matter though. It’s one of the most powerful chapters of the book. We find out who Addie really is. Turns out she’s a mean, nasty, violent woman who has no faith in the world or her family or her marriage or herself. There’s been tons written about Addie, and some consider her a feminist of sorts. I think she’s the story’s villain. It’s because of her that all this madness occurs.

But if it wasn’t for her villainy, we’d have a boring short story about a loving matriarch being buried in the backyard. Who wants that?

Next up: a deviation from the “classic” challenge, where I tackle a more modern literary hit.