If anyone’s noticed, one of my minor obsessions is alien life. I’m not one of those who believes we’re being probed by Roswell-style aliens. My interest is more about fantasy (and maybe reality). If there’s a book or movie with aliens in it, chances are I’ll be interested. Take one of my favorite TV shows: Farscape. Human dude gets mixed up with a bunch of renegade aliens. What more could you ask for?

But I also love the scientific aspect of the search for extraterrestrial life. As we discover more Earth-sized planets, the question of extraterrestrials becomes more of when we’ll find them, rather than do they exist.

I’ve written about why we haven’t found any evidence of alien life yet. (short answer — we don’t know why). If we do find intelligent life, what will it look like? For 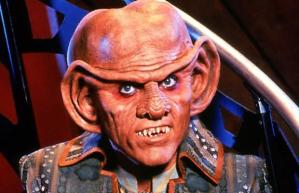 years I’ve thought that alien life would be wildly different from our own. Not like Star Trek, where the aliens are basically humans with a few bumps and ridges, and a little different hue. Instead, the real aliens would, due to evolutionary forces unique to their home worlds, be more bizarre than we could fathom.

Not so, says a professor named Simon Conway Morris from Cambridge University in England. Evolution is a streamlined process — it selects the features best suited to thrive in life. And independently, different species evolve similar features (eyes, for instance). If this takes place on Earth, then the same process would apply on other planets.

He also states that evolution has produced life suitable for its environment. If you want a sophisticated plant, then you design it as a flower or tree. Aquatic animals would be fish-like, and creatures that fly would have wings.

The question remains, though, what about intelligent life? Could we assume that

they would look like us only because we’re the first intelligent species on the planet?

In his novel Calculating God, sci-fi writer Robert J. Sawyer had a intriguing take on ETs. Two different intelligent species contact humans. Both are similar proportion and of similar intelligence to humans, though one is a spider-like creature. These aliens were very like us, suggesting that intelligence is linked less to physical resemblance than to shared understanding, beliefs and values.

I guess someday we’ll find out the truth. Or maybe we truly are alone after all.

One thought on “Aliens: do they look like us?”