Thanks to the good people at Scientific American, one of my favorite news sources (as well as the oldest continuously operating magazine in the US), we’ve got some more strange Earth-based life forms to marvel over.

Last month, Scientific American released a slide show featuring ten newly-discovered creatures. These range from a frog that keeps its eggs inside the body instead of dropping them into a mucky pond, to a tiny jellyfish-like sea creature off the Australian coast that resembles a see-through mushroom. But these three oddballs below are my favorites of the bunch.

Anzu Wylei, aka the Chicken from Hell

Unfortunately this one is NOT a living creature, but a newly discovered fossil. It took me a while to get past this disappointment, but I’m good now. Anyway, Anzu is a feathery birdlike dinosaur that roamed North America 66 million years ago. Why is it called the Chicken from Hell? Not for the obvious reasons — its fangs and claws and general viciousness. Nope. It’s because it was found near the Hell Creek fossil site in South Dakota. That part is a letdown. But on the brighter side, Anzu is derived from the name of a feathered demon in Babylonian mythology, so there’s a glimmer of dark hope for this crazy looking beast. 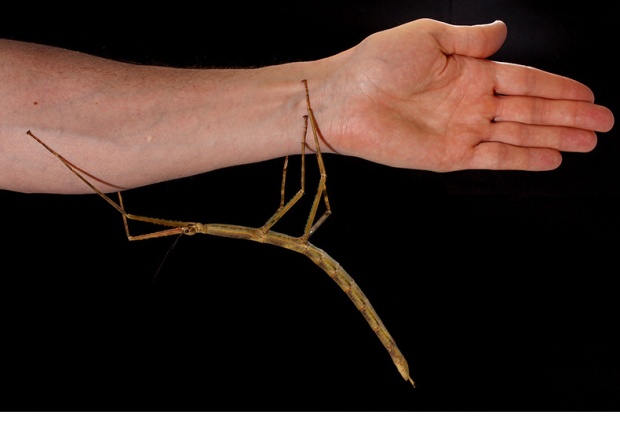 I hate bugs. Even ladybugs — I pretend to like them but that’s a lie. Bugs are ugly and evil. Luckily they’re all really small. Or so I thought. Now comes the Walking Stick. As the image shows, this bug is as big as a human forearm. Can you imagine a dozen or so coming after you? I can. So how was this big-ass bug never discovered? Turns out it’s a master of disguise. Thank God this tree branch creature lives in Vietnam, and not in New Jersey.

I like this freaky looking thing for two reasons. 1) it lives in the ocean, and I love the ocean. 2) it looks cool. (Call me shallow, that’s okay.) Anyway, this pretty little gastropod sports brilliant shades of red, blue and gold. But it isn’t just a pretty face. This Photogenic Sea Slug gets along well with its neighbors. Algae that lives in its stomach helps it with photosynthesis, and in turn the slug cleans debris from nearby coral and feeds them to the algae. Win-win.