Oculus is a cunning, tough horror movie that will leave you unsettled. 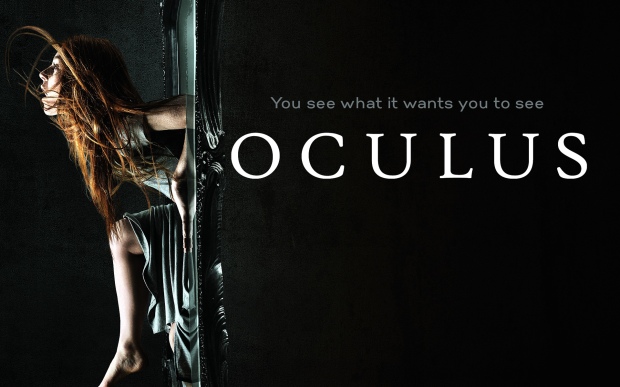 When we last left Karen Gillan, the Scottish woman with the big eyes who played Amy Pond in Doctor Who, she was staring at the weeping angels to avoid being sucked back in time (spoiler: she wasn’t successful). 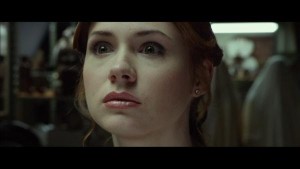 Now, in Oculus, the actress is donning an American accent (competently) as she stares into a haunted British mirror to fight an evil force.

Oculus is the latest horror offering from the forces behind the Saw series (too gory for me) and the Insidious flicks (good, fun horror). I was expecting something along the lines of Insidious. I was not prepared for a dark and harrowing tale of family madness, PTSD and psychological horror.

The setup: Tim is released from a mental hospital. Ten years earlier, he, along with his sister Kaylie (Karen Gillan), witnessed a horrific crime when their mother turned psychotic and was shot by their father. They only survived because Tim killed their father. Tim has been thoroughly rehabilitated. Kaylie, on the other hand, has gotten hold of the evil mirror which may have driven their parents (their mother is played effectively by Battlestar Galactica‘s Katee Sackhoff, aka Starbuck) to madness and death. She intends to defeat the evil that lies inside, along with Tim’s unwilling help. 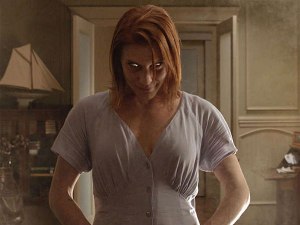 Oculus was great on two levels.

First, the narrative structure was brilliantly crafted. We bounce back and forth between the present and the original crime 10 years earlier. As the movie progresses, the past and present merge to great effect. And, even though we know the outcome of the events in the past, there’s still heart-pounding tension.

Second, one of the strengths of horror/sci-fi/fantasy is that it gives us the chance to explore common, painful themes in a fantastical setting. Oculus does that. On one level, this is the story of a horrific childhood, mental illness, and the stubborn hold that trauma has on our lives. A good chunk of the film is spent debating reality, for good reason. I enjoy writing about the supernatural because it allows me to explore deeper issues. The writers of Oculus obviously feel the same.

Oculus draws on a rich heritage of horror films. I picked up on the references to The Amityville Horror, a classic movie about possession that scared the life out of me as a kid. It uses these tropes effectively.

My main complaints would be that the Nightmare on Elm Street effects of “is this real or not” were overdone, and the nature of the evil, which was way stronger than our protagonists, was never hinted at (perhaps setting up a sequel). And the title sucks. I keep calling it Ocular. Not good.

Oculus is not an easy movie. It is not an escape. But it shows the power of horror to shine a spotlight on very human terrors.