In the hands of this fiction master, After Dark is nighttime Tokyo reimagined as a surreal noir-ish dreamscape. 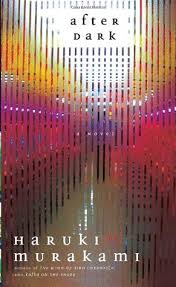 I was in one of my favorite bars in Jersey City talking to the bartender Tom about the new insomnia-themed sci-fi novel Black Moon (which is on my shortlist). After a quick tour of books — others and mine — he threw one title at me: After Dark, by Haruki Murakami. Tom said it was strange, offbeat and captivating.

So I tried it. Tom was right.

The best words to describe After Dark is The Twilight Zone. The classic TV series often featured stories, settings, and characters that weren’t outright sci-fi or horror, but were just off-kilter enough to not be truly of this world. That describes After Dark.

The novel is set in a not-so-safe district of Tokyo. The narrator brings us in with a swooping eagle-eye view of the city (pretty 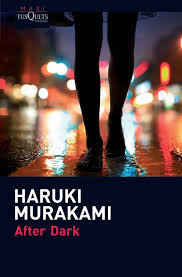 much literally). Murakami uses an interesting technique where the narrator is our guide. He is nearly a character himself, though one who is never named or described. Instead he is the all-knowing, all-seeing, and he lets us have a glimpse.

What exactly do we glimpse? A pair of protagonists in their late teens chatting in a Denny’s after midnight. Mari is a 19-year-old student who doesn’t want to go home. Takahashi is a jazz musician on his way to an all-night practice. Mari and Takahashi met months earlier when Takahashi’s friend went on a date with Mari’s beautiful sister Eri.

What we get is a lot of talk between the two — on life, loneliness, alienation. After Dark almost reads like a play. We don’t get much action, but it doesn’t matter. These two characters are compelling.

Once Takahashi leaves Mari the action picks up. Mari gets tangled up with the manager of a “love hotel” where a Chinese prostitute has been beaten. We get glimpses of the dark side of this city, and it’s fascinating.

The real strangeness comes when we get to the story of Mari’s sister Eri, the breathtakingly beautiful model. Eri sleeps through the whole book. Except for when she becomes trapped inside a TV.

Yes. That’s right. Trapped in a TV. The brilliance of Murakami is that he could write that and pull it off.

If you choose to read After Dark — and you should — don’t expect plot-twisting thrills. What you’ll get instead is a haunting story about young people on the edge.