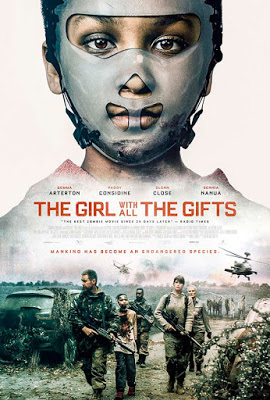 You think every zombie story has been told?

Well then you haven’t seen The Girl With All The Gifts.

First off, HUGE DISCLAIMER, this started out as an acclaimed book by M. R. Carey, one that I haven’t read. Instead I took the lazy way out and saw the movie. No excuse, but there it is.

So back to the story.

Imagine a tale told from the point of view of one of the monsters, only this monster isn’t all monstrous, and she doesn’t see herself as a monster. That would be Melanie, a young self-aware and cunning (not crazed) creature.

But, alas, Melanie is a monster. One of the Hungries, as their called here, victim of a plague caused by a fungal infection. (Note: the secret of Melanie’s origin is one of the more disturbing in the realm of horror.)

The Girl With All The Gifts opens with her trapped in a military camp among other similar kids. Soon that camp is overrun, and Melanie is among a core group of humans who escape. Together they romp through a ravaged landscape in a desperate attempt to survive, and hopefully defeat the infection before it destroys humanity.

Throughout the movie Melanie is both hero (because of her humanity) and villain (because of her nature), which makes for a thrilling and unexpected ride. For those zombie lovers out there, the zombies are wickedly fast and creepy as hell.

The Girl With All The Gifts is about a child, but this is not a children’s movie. It’s scary and unsettling and well worth your time.