From sleep disturbances to disturbing art.

When I was younger I suffered through night terrors. I would be in the grip of a nightmare, screaming with my eyes open. It took a lot for my parents to bring me out of each episode. To this day I can still remember the theme and feeling of those nightmares.

I grew out of them. But I still have random incidents of what’s called hypnopompic hallucinations. Occasionally as I’m waking up I’ll see fantastical, otherworldly insects crawling on my bedside or dangling from the ceiling. The first couple of times it happened I scoured my bedroom looking for the centipede with a thousand legs and razor-sharp spines. I soon realized that they were leftover fragments of dreams. Now when I see these creatures I just close my eyes again.

I’m not alone in my sleep issues. Nicolas Bruno is a photographer who has dealt with sleep paralysis since he was 15. Sleep paralysis is pretty much what it sounds like: the body is weak and immobilized either when drifting off to sleep or waking up, and the person experiences strange and terrifying dreams or visions. As Bruno told 1o9.com:

“I have experienced bone chilling hallucinations and extreme terror during these dreams. Faceless silhouetted figures, embraces from shadow-like hands, warping of reality around me – all while [feeling] completely paralyzed.”

What did Bruno do with these terrifying experiences? He turned them into art. He’s created scores of photographs that reconstruct the content and mood of these dreams. Below are two of my favorites. Check out his website here for more. 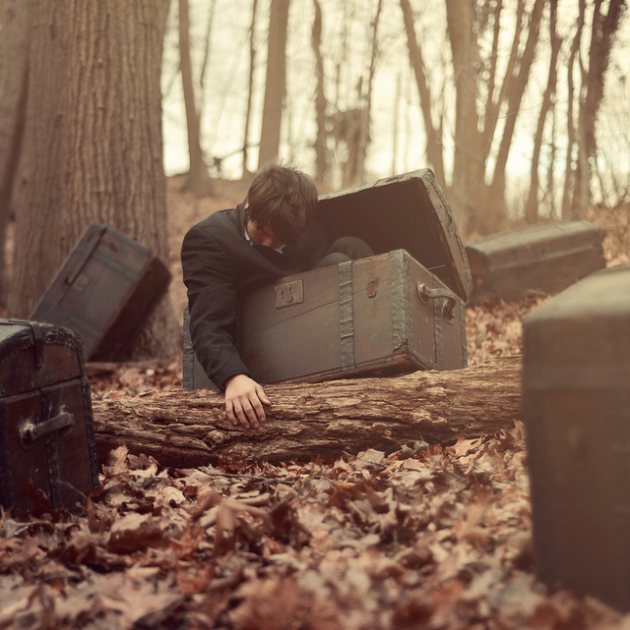