Sympathy for a devil? Sci-fi meets serial killers in an intriguing and fast-paced thriller.

There’s nothing good to say about Jeffrey Dahmer, who murdered, ate, and attempted to zombify 17 men from 1978-1991, except that he’s dead.

So imagine a novel where the reader identifies with the clone of this monster in the form of a “normal” 15-year-old boy. It’s here. It’s called Cain’s Blood, by Geoffrey Girard. And it works. 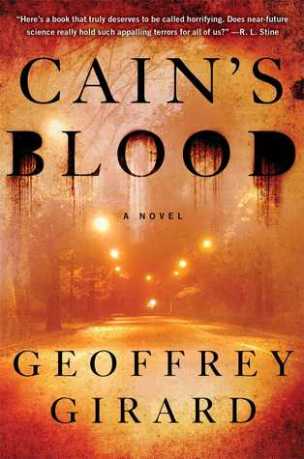 The plot: a secret government-related outfit has been cloning the nation’s most notorious serial killers in order to determine their genetic underpinnings, and then create a biopharma weapon. Some of the teenage closes escape, along with their creator, and former Army Captain Shawn Castillo is called in to track down the renegades. He stumbles upon Jeff Jacobson, a teenage clone of Dahmer, and together they travel the country searching for the clones.

First, what I didn’t like. Too much gore. I’m not a fan. But how can you escape gore in a book about serial killers?

Also, the protagonist, Castillo, is a stock thriller hero: nearly superhuman, endlessly brave, though haunted by a dark past. I tend to avoid books featuring a CIA/FBI agent, police detectives, forensics, etc. I like people who seem more relatable. Just my own preference.

The character who is relatable turns out to be the young Dahmer clone. And that’s what I liked most about this book. Jeff Jacobson thinks he’s a normal kid, and for the most part, he is. How does he react when he finds out the truth? Can he rise above his genetic heritage?

Girard hooks the reader in 3 ways:

–A great premise: while clones have been used in movies (The Boys from Brazil, The Island) and in fiction (JA Konrath’s The List, Kazuo Ishiguro’s Never Let Me Go), Girard takes the concept in a dark and entertaining direction.

–Fast-paced storytelling skills. I burned through this book in a few days.

–Focusing on the plight of a normal kid in Jeff Jacobson, who must grapple with the whole nature/nurture issue.

About the science: this book takes on the nature/nurture debate. Is younger Jeff destined to become a serial killer, or would he be positively influenced by his upbringing? Girard hedges his bets here – some clones are murderous, others don’t seem to be.

But the reality is more complex. Technically, identical twins are clones of each other, yet they often do not turn out the same way. Some twins use different hands. Some twins are gay/gay, while others are gay/straight.

We know precious little about how genes work. For example, scientists are only beginning to learn about so-called junk DNA, the huge sections of our genetic code that seemingly have no function.

And then there’s epigenetics. Can life experiences actually affect the genetic code, not just for the self but for future offspring, several generations on? Scientists used to laugh this off. Now they’re not so sure.

Killer clones aside, truth is a lot more complex than fiction.