I was a teenager when I watched Clive Barker’s iconic horror movie Hellraiser. It freaked me out, to say the least. I’d never seen evil presented on screen in such a visceral, repulsive way. What made it so scary? First, several years of Catholic school had conditioned me to be afraid of hell. Second, the villains — Pinhead and the rest — were not just mindless monsters. They were human. Too human.

This movie has stayed with me after all these years. I haven’t watched it in a long time. Maybe I should. But will Hellraiser hold up? Sure, it was low-budget, but the core element of pure horror will remain as strong as ever, I’m guessing.

In the meantime, I came across this article in io9.com that details some behind-the-scenes tidbits about the movie. Here are a few highlights:

–Clive Barker sold the script for Hellraiser based on the idea alone. He’d never directed a movie — he didn’t even know how. Unfortunately the two books in the library on directing were both checked out.

–Jennifer Tilly auditioned for the role of Kirsty. But Barker wanted Ashley Laurence, an unknown actor, to play the part. He had to fight for her. Obviously he won. 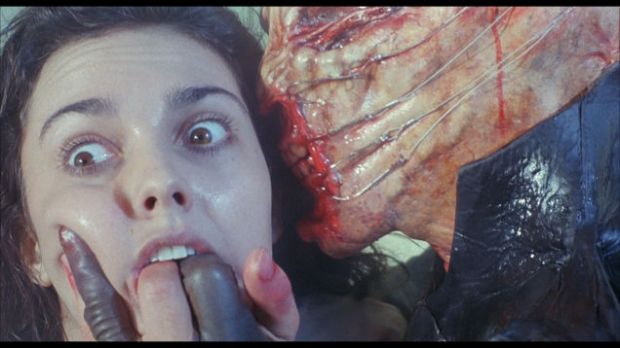 –Doug Bradley, who played Pinhead, did not want to take the role. Why not? Number one, the hours of makeup required. Number two, with all the makeup, who would recognize him? Now that Pinhead is an icon, I bet he’s glad that he took the role.

–The original title was The Hellbound Heart, but the studio heads worried it would be mistaken for a romance. If only.

–The costumes were inspired by those seen in S&M clubs. Then again, that’s not a surprise.

One thought on “Hellraiser: behind the scenes”